Contents on the topic "Calculate Triangle" 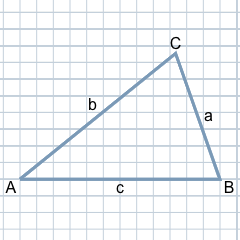 Important properties of a triangle are its area, the length of its three sides, the perimeter of the triangle, the angles of the sides to each other and the heights of each side to the opposite corner. The calculation of these triangle­properties and their conversion using corresponding formulae can be carried out conveniently with the triangle calculator and will be discussed in more detail below.

Label of the Triangle

What are the three corners of a triangle called?

In a triangle, the three corners are usually labelled with the capital letters A, B and C. The labelling with A, B and C is usually done counterclockwise and starts with A at the bottom-left corner.

What are the three sides of a triangle called?

What are the three angles of a triangle called?

The three inner angles of a triangle are designated by the Greek letters α (alpha), β (beta) and γ (gamma). They are located at the corresponding corners, i.e., at corner A, B and C there is an angle α, β and γ, respectively.

What is the height of a triangle?

What other readers have also read

Which values are given?

Please select which values of the triangle are available for calculating the area or other properties of the triangle. Although the area of a triangle can be calculated quite easily using the first selection "One side and corresponding height h", the two entries are not sufficient to calculate an entire triangle exactly from them.

In order to calculate a triangle uniquely, other or further given values are required: If the values of one of the other options that can be selected here are given in each case, a unique triangle can be constructed for it. With these options, the usual matching abbreviations are also displayed. Here, "S" stands for the correspondence of a side length and "A" for the correspondence of an angle. A triangle can only be calculated unambiguously using these options. For example, a triangle cannot be unambiguously determined on the basis of only three given angles (AAA).

In the following, all selectable options, i.e., combinations of given values, are described in detail.

One side and corresponding height h

Please select this option if you know the lengths of all three sides of the triangle. When calculating triangles, a constellation with three given sides is often also abbreviated as 'SSS'. Using this information, the entire triangle can be constructed. Thus, the area and perimeter of the triangle, as well as the heights of a, b, and c, and the angles α, β and γ, can be calculated.

One side of an equilateral triangle (SSS)

Please select this option if two sides of the triangle are known together with the angle enclosed by them. When calculating triangles, a constellation in which an angle and its enclosing sides are known is often abbreviated as "SAS". This can be used, for example, to calculate the length of the third side, so that all other properties of the triangle can subsequently be calculated.

Thus the case with two given cathedrals forms a special case for the SAS calculation in the general triangle, since the intervening angle of 90 degrees is known anyway. One could therefore also choose the previous option "Two sides with an included angle (SAS)" to calculate the triangle, but the simplified formulas enable the calculation of the right triangle.

S So, for a right triangle, these two sides, namely the values of the two catheti, are sufficient to calculate all the other properties of the triangle and thus construct the entire triangle.

One side and two angles (SAA, AAS or ASA)

Please select this option if two sides of the triangle as well as the angle opposite to the longer given side are known. When calculating triangles, a constellation where two sides and the opposite angle of the longer side are known is often also abbreviated as 'SsA' or 'AsS'.

We are looking for the missing side c, the perimeter and the area of the triangle, the remaining two angles α and β, and the heights of all three sides.

You can enter these values into the triangle calculator after selecting 'Two sides with an included angle (SAS)' under 'What values are given?'. The calculator will then calculate, as follows, all the values you are looking for and will also output a graphical result of the calculated triangle.

How is the missing side of a triangle calculated?

Using the given quantities for the sides a and b as well as for the angle γ the length of the unknown third side c can be calculated with the help of the general cosine theorem for c.

and converted to c

How is the perimeter of a triangle calculated?

Using the given lengths for sides a and b and the length of side c calculated in the meantime, the perimeter of the triangle can be determined as follows:

Formula: Perimeter U of a triangle

The perimeter of the triangle is the sum of the lengths of all three sides a, b and c.

The circumference of the triangle is 15.97 in.

How is the area of a triangle calculated?

Using the given lengths for sides a and b and the length of side c calculated in the meantime, the area of the triangle can be calculated using 'Heron's formula'.

where s = half the circumference, i.e.

If we insert s = 7.98 into Heron's formula, we finally obtain

How are the missing angles of a triangle calculated?

First we calculate the angle α. Using the given lengths for sides a and b and the length of side c calculated in the meantime, the general cosine theorem for side a can be used as the basis for calculating α.

Formula: Cosine theorem for side a

If one converts the cosine theorem to α, one obtains

The value just calculated is the radian of the angle α, abbreviated as 'rad'. The radian is converted to degrees using the formula below:

Formula: Conversion from radian to degree

By substituting the intermediate result α rad, we obtain

Now that the angle α is calculated and the angle γ is given anyway, the remaining angle β can be calculated. For this, the angle sum theorem can be used.

The sum of the three interior angles α, β and γ in a triangle is always 180 degrees.

If one converts the angle sum theorem to β, one obtains

Inserting the already calculated angle for α as well as the given angle γ, one obtains

How are the heights of a triangle calculated?

Since all sides and angles are now known, the following formula can be used to calculate the height of a.

Formula for height of a

If we insert the values for the already given side c and the angle β, we obtain

Height of b and height of c

Both heights can be determined analogously based on the calculation of the height of a. For hb, hb = a × sin γ. For the height at c, the formula hc = a × sin β applies. After inserting the concrete values, the triangle calculator calculates the following results for the remaining heights.

The triangle calculated in this manner, with given sides a = 4 in and b = 6 in and an angle γ = 70 degrees enclosed by both sides a and b can be drawn using all of the calculated values as follows:

As source for the information in the 'Triangle' category, we have used in particular:

The pages of the 'Triangle' category were last editorially reviewed by Michael Mühl on November 29, 2022. They all correspond to the current status.